I’m sure that most of us have had a boss at some point in our lives whom we didn’t like. I immediately think of the ones who pre-judged me, or who treated the staff like we were stupid, or who simply wouldn’t listen to the subject matter experts because they thought that leadership meant bossing people around. Since there is a wealth of books on leadership and management, a highly profitable market, it follows that there is a scarcity of good bosses. That organisations are prepared to pay good money for leadership development is also, I believe, an indication that many organisations recognise the disastrous financial and social impacts of bad bosses.

Despite the relatively recent leap in training opportunities and growth in the field of knowledge regarding leadership, we still have organisations that cultivate terrible bosses. Why is that? I have a theory and I’m going to use Causal Layered Analysis by Sohail Inayatullah to identify where I think the problem lies and what we can do about it. It’s a little bit heady, but please bear with me because the insights can be revolutionary for your leadership development. 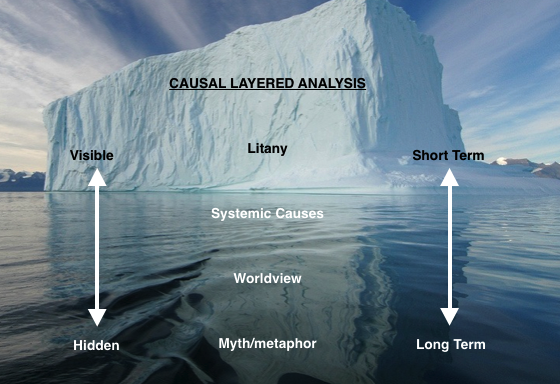 Causal layered analysis implies that with any situation, there are multiple layers to reality which need to be understood if you want to effect lasting change.

The first layer is called the litany. This is usually a superficial understanding or statement of the problem, often the visible aspects, newspaper headlines, and metrics. For our leadership example, it might include, the financial cost of bad leadership, any of the newspaper headlines during the collapse of Enron, high employee turnover rates, stress related health issues, or the ratings that people give to their CEOs on www.glassdoor.com.

What is the litany in your organisation? What are the tangible positive and negative impacts of your leadership style on your staff and performance outcomes?

The next layer provides a systemic and often more academic understanding of the structures that lead to the visible outcomes in the litany. Systemic causes of poor leadership and/or performance outcomes might include hyper-competitive cultures, lack of trust, understaffing, systemic prejudice, lack of equity and diversity training, insufficient leadership development, etc. Most organisations will try to resolves issues at this level and whilst it might be more impactful than a band-aid fix at the level of litany, it might not be long before problems start to creep back again.

For example, in one organisation I worked for, I was called in to advise a manager who was giving childless staff on his team greater travel opportunities than those with children. With all good intentions, he thought he was doing the right thing by allowing the parents to spend more time with their kids but this led to poor team work, jealousy and injustice. The underlying systemic cause was a lack of leadership development to help him tangibly understand his obligations for fairness by giving people the right to make those choices themselves.

The third layer is that of worldview. Here the underpinning philosophies and values are examined for the ways in which they might be contributing to the problem. For example, a friend of mine noticed that her boss would ask her about her children (but never her work) and would ask male members of the team about their work (but never their children). This subtle use of language and conversation implies that he has an inequitable worldview that values women only looking after children and men only being at work. From a leadership standpoint, this layer represents the first layer that each of us can make impactful change in our leadership style and one which organisations can align their values with.

For leadership to be cooperative, a cooperative worldview must be present in this third layer. In my experience, terrible bosses typically have a ‘subordinated cooperation‘ worldview whereby they see their relationship with you as akin to master/slave, superior/inferior, or perhaps powerful/powerless. By contrast, ‘coordinated cooperation‘ recognises that whilst we may not be the same, our diversity enriches us and that we can come together and work with mutual respect, no matter your authority or position within an organisation. If organisations do not make changes at this layer, then no matter how many systemic solutions they find, an underlying worldview of subordinated cooperation will always lead to bad bosses and outcomes.

The fourth and most powerful layer of reality/change is that of metaphor/myth which describes how a problem or culture feels. Metaphor and story are deeply connected with culture and vision and can effect long lasting change. For example in the United States many people believe in ‘The American Dream’, or in Australia, ‘The Lucky Country’ which arouses an emotional reaction that goes well beyond a clinical depiction of vision. The emotive nature of it means that it often bypasses the rational brain, allowing for deeper change at a ‘gut’ level. This is also part of the reason why organisational identity is so hard to change through rational persuasion. You need to inspire people through story and imagination so that it sinks in deep. 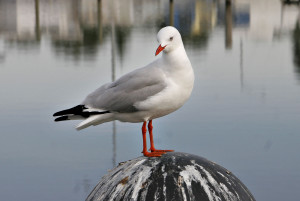 Metaphors for leadership – Seagull manager: flies in, makes a lot of noise, poops on everything and then steals all the good chips.

Whilst an organisation may implement a program to inspire a new worldview (the third layer), culture eats strategy for breakfast and myth/metaphor will always win. For example, if an organisation has an ‘eat your young’ culture or metaphor, cooperative leadership will be next to impossible to establish. Instead, a ‘nurture your young’ metaphor will be needed to support a cooperative leadership culture. Efforts can be focused on changing the underlying metaphor through more ‘right brain’ techniques such as the telling of organisational stories, neuro-marketing techniques, and images that communicate a new vision by symbolic means.

Thus the secret to a cooperative leadership culture lies in the metaphor/myth of an organisation and what it values. Ultimately this comes back to the leader’s ability to stand up for what they believe in, despite the culturally accepted practices around them. Do you see your employees as minions who carry out your every command? Or do you see people as your equal whereby despite your outward role differences, you are like a bird flapping its two wings (e.g., managers vs. employees) in coordinated cooperation?