In recent times I’ve noticed a lot of people using ‘feminist’ as a derogatory slur. This is somewhat perplexing because as John Scalzi points out in his blog post ‘To the Dude bro that thinks he’s insulting me by calling me a feminist’, a feminist is someone who thinks that women deserve the same rights and opportunities as men.

Why doesn’t everybody want this? Did I miss something? Are these men and women who use ‘feminist’ as a slur, scholars of philosophy who have realised how the limitations of social constructionism and post-structural thought impact modern day feminism? Or have they been listening to a bit too much Rush Limbaugh and Alan Jones, who are deathly afraid that women are going to ‘Destroy the Joint’ by booting men off the ladder and relegating them to the lowly rank of… well… many women (and non-whites, and non-Christians, and non-hetrosexuals etc)?

I propose that the issue is one of mismatching paradigms. When we talk of patriarchy, it refers to the vertical system of a dominating pecking order that is traditionally led by men. When we refer to feminist ideals, it does not seek to dismantle the pecking order so as to establish a new one with women at the top. Rather, it has a horizontal outlook and takes issue with the whole idea of a pecking order, which happens to be quite problematic for many men too. Namely the men at the bottom of it. 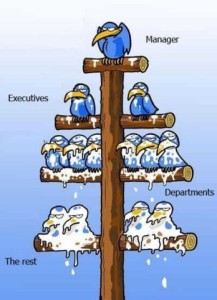 Subordinated cooperation in a nutshell

Interestingly enough, these two ways of thinking even end up in the language differences in little boys and little girls. Deborah Tannen undertook numerous linguistic studies and found that generally speaking, little girls in the USA bond through being the same and telling each other their secrets (I have a dog, too!), while little boys bond by bettering each other (I can hit the ball to the moon!). But we also isolate each other through similar means. Women will hurt each other through exclusion, and men through putting each other down. From this stand point, it makes sense that many men, who only really know the pecking order paradigm, are deathly afraid of being kicked off their perch or put down by women. Similarly, many women are afraid, I think, of excluding or feeling separate from the men in their lives. They don’t necessarily realise that feminism has a different agenda: to create a round table.

Aside from the underlying paradigm mismatch, words such as ‘masculine’ and ‘feminine’ seem to further confuse matters. If I am a woman with stereotypical ‘masculine’ traits (decisiveness, rationality, objectivity, etc) should I be insulted? Or should men with stereotypical ‘feminine’ traits (generous, nurturing, cooperative, etc) be insulted? Does ‘feminism’ mean that we can only embrace our feminine selves at the expense of masculinity? Or should we be embracing both our masculine and feminine selves no matter our gender?

Whatever your answers, I propose that feminism needs to adopt a non-gendered frame that enables greater solidarity and understanding of the injustices at hand. Specifically, the frame of subordinated cooperation and coordinated cooperation, as described by Indian mystic and philosopher, P.R. Sarkar. This lens transcends the limitations of gender based language and instead focuses on the nature of the harmful power structures at play, particularly how we treat one another. Furthermore, it offers a new way of understanding other power related issues such as racial equality, workers’ rights (and responsibilities), prejudice and systemic privilege.

Subordinated cooperation is based on a master-slave relationship while coordinated cooperation is when two different entities come together to work with equal rights, prestige and standing. Of course, this is not to say that hierarchy is necessarily bad. We can have a hierarchy that works from a base of coordinated cooperation whereby a supervisor may treat a subordinate with dignity and respect as they work towards common organisational goals and fulfill their potential. It is not the structure as much as the relationships and capacity to fulfill one’s potential that are important here. I may have more skills or a greater intellect than you, but that does not necessarily make me a better human being. And if we get back to the basics of human experience and what you might wish for on your death bed, I would go so far as to say that what matters most is the radius of your love, not where you stand in some socially constructed pecking order or, perhaps, your contribution to economic slavery.

Thus, IMHO the women’s liberation movement (and every other liberation movement for that matter) needs to adopt an articulated goal of coordinated cooperation. This is where despite our differences (remembering that diversity is the law of nature), we are working towards a common goal in a way that not only values the different contributions that we make, but also our capacity to fulfill our potential individually and collectively.